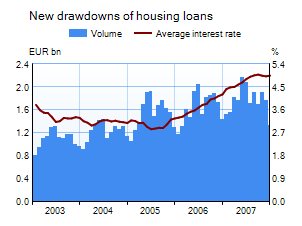 The stock of loans to non-financial corporations amounted to EUR 48.4 billion, with an average interest rate of 5.19%. The annual rate of growth in the loan stock fell to 12.9% in December, from the peak of 14.1% in November.

The stock of household deposits was EUR 65.3 billion in December, up year-on-year by more than 12.