At the end of March 2020, Finnish households had security holdings[1] worth EUR 58.2 billion, which is EUR 12.8 billion less than in January 2020. The value of the holdings decreased in February and March by EUR 13.2 billion, mainly due to the decline of the equity markets. Over the same period of time, households made new investments of EUR 0.8 billion in net terms.

In addition to securities, deposits make up a significant proportion of Finnish households’ financial wealth.[2]  At the end of March 2020, the aggregated household deposit stock amounted to EUR 96.9 billion, growing at an annual rate of 6.2%. Transaction accounts amount to 87% of the deposit stock. 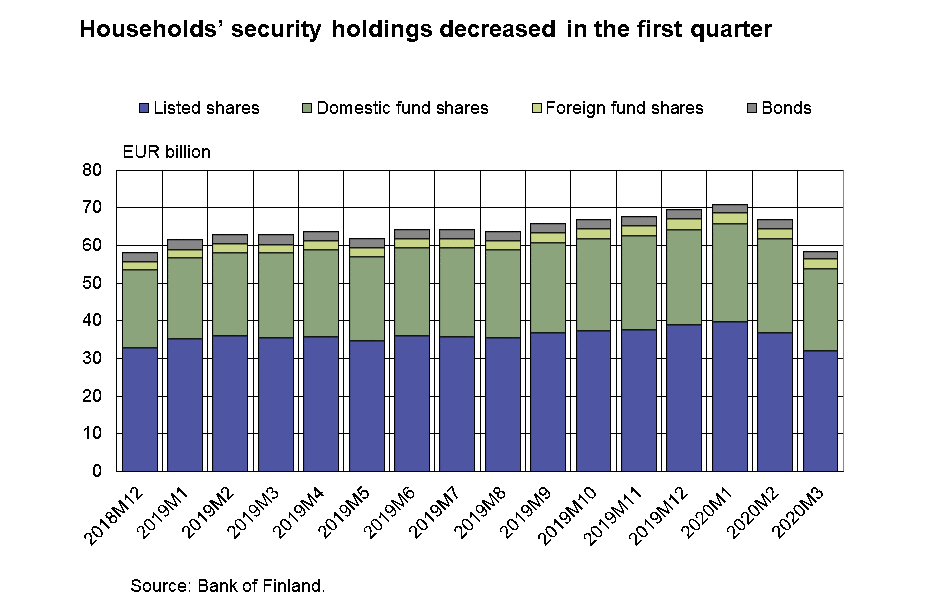 At the end of March 2020, Finnish households held investments of EUR 21.9 billion in domestic investment funds, which is EUR 3.9 billion less than in January 2020. Already in February 2020, changes in valuation reduced households’ fund holdings by EUR 1 billion. However, a more significant change in the value took place in March, when changes in valuation reduced the holdings by EUR 2.3 billion. In addition, households redeemed fund units worth a total of EUR 0.5 billion in net terms in February and March.

Related statistical data and graphs are also available on the Bank of Finland website: https://www.suomenpankki.fi/en/Statistics/saving-and-investing.

The next news release on saving and investing will be published at 1 pm on 13 August 2020.

[3] Households made net subscriptions in foreign investment funds’ units during the first part of the year, and there were no significant (net) redemptions in February or March, either.