​Finnish version of the review will be published on Saturday 8 October. 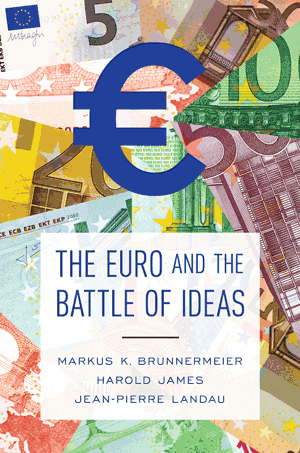 Books have been written about the Economic and Monetary Union which include a lot of opinions but fall short on history and research. In this regard, the recently published The Euro and the Battle of Ideas (Princeton University Press 2016) stands apart. The book is authored by a group of three writers with diverse backgrounds: Markus Brunnermeier, a leading younger-generation economist of German origin, Harold James, an esteemed scholar of economic and German history, born in England, and Jean-Pierre Landau, who has acted as Deputy Governor of the Banque de France.

The book describes extensively the differences between the German and French visions, perhaps more than necessary for some readers. Germans are depicted as favouring rules, the French discretion; Germans insisting on responsibility, and the French calling for solidarity; and the Germans suspecting solvency problems where the French think liquidity is the matter. The perceived differences are traced in the book to certain formative historical experiences of these nations.

However, one is well-advised to recall the characterisation by Hans von Ploetz, former Secretary of State at Germany’s Foreign Office: The positions of Germany and France are often so far apart that when they are reconciled, the opinions of many others will have been taken into account in the process. According to the book ”the Finns, Austrians, and sometimes Slovaks and Poles behave as if they are more Germanic than the Germans, and France is often seen as a champion of the Mediterranean Europe.”

The walk on the beach in Deauville, France by Nicolas Sarkozy and Angela Merkel in October 2010 figures out already in the introduction of the book. It has been told that during this walk they made a compromise on government debt restructuring: Germany would show some flexibility on fiscal rules if France would, in return, accept ”an adequate participation of private creditors”. The backdrop was the Greek sovereign debt crisis and the desire to end government liability for crises, which had gone on since the Lehman Brothers collapse of 2008.

In his memoirs, the US Secretary of the Treasury Tim Geithner states that he objected to the debt restructuring at the time, as it could have been followed by a huge wave of contagion to other countries. Jean-Claude Trichet, President of the ECB, was afraid of the same. Markets did indeed react abruptly. Yields in peripheral countries soared violently. The crisis not only re-escalated but also spread to Spain and Italy.

EU criticism is often dominated by complaints of encroaching Brussels supremacy. In a broad number of ways, this book demonstrates that in fact, during the financial crisis, power shifted out of Brussels to the capitals of the member states. It criticises the Commission president José Manuel Barroso for not giving a single major speech on the subject for he was worried that the Commission might be discredited it overstretched politically. However, another explanation may be that whenever taxpayers’ money is at stake, the European Commission is hardly given a say beyond the (relatively small) EU budget. Moreover, the IMF was also wanted on board.

Debt restructuring was back on the agenda as the markets temporarily calmed down in summer 2011, and Greek debt to private investors was cut the following year.

Summer 2012 marked a new turning point in the crisis. First, in the June summit in Brussels, the heads of state decided on the creation of the banking union. It was a major step forward The establishment of the banking union and its three pillars – single banking supervision; resolution mechanism involving stronger early intervention powers for the authorities and investor liability; and deposit guarantee – are diligently described in the book.

Later, in July 2012, the ECB President Mario Draghi stated the famous words in London: ”Within our mandate, the ECB is ready to do whatever it takes to preserve the euro. And believe me, it will be enough.” The ECB Governing Council acted accordingly in August and September. According to the book, the implicit support of Ms. Merkel and Finance Minister Wolfgang Schäuble was one of the reasons why the speech had such an impact.

The Euro and the Battle of Ideas is an impressive accomplishment. It is an extensive analysis of the Economic and Monetary Union, the financial crisis and its political background and examines the subject in a critical but balanced manner. I really welcome that esteemed economists and historians have gone to such an effort. There are details that I recall differently. At any rate, the book is a stimulating read, and will deepen and broaden any reader´s perspectives.