In addition to the most significant items, the supply and demand of liquidity also reflects changes in other autonomous factors. ‘Autonomous factors’ refer to items on the balance sheet of the central bank which have an impact on the liquidity of the banking system but cannot be directly influenced by the implementation of monetary policy (e.g. banknotes, deposits by the government with the central bank, central banks' own investment portfolios). ‘Other autonomous factors’ include revaluation accounts and changes in central banks' capital and provisions. The Eurosystem forecasts the development of all balance sheet items as part of the liquidity management process.

Management of liquidity in the banking system

The monetary policy of the Eurosystem has been conducted under normal conditions (before the financial crisis) by keeping the banking system in a liquidity deficit. In this case, market operations are used to provide just enough funding to enable banks to meet their minimum reserve requirement. The most important instrument in adjusting the amount of liquidity is the weekly main refinancing operation, where the minimum bid rate for banks is the policy rate of the Eurosystem.

The Eurosystem decides the amount of liquidity provided based on its own estimates so that the implementation of monetary policy leads to the desired level of market rates. At the systemic level, banks want to borrow at least an amount covering their reserve requirements – otherwise some of them will have to resort to the more expensive marginal lending facility. On the other hand, credit institutions do not want to hold excess central bank money, since deposits exceeding the requirement are paid the interest on the deposit facility, which is lower than the policy rate.

Banks also trade among themselves on central bank money. In an interest steering system based on an averaging of the holding of reserves, one can identify three liquidity amounts at which the development of the shortest interest rates is stable, and two levels at which interest rates react more strongly to changes in the amount of liquidity (see chart). 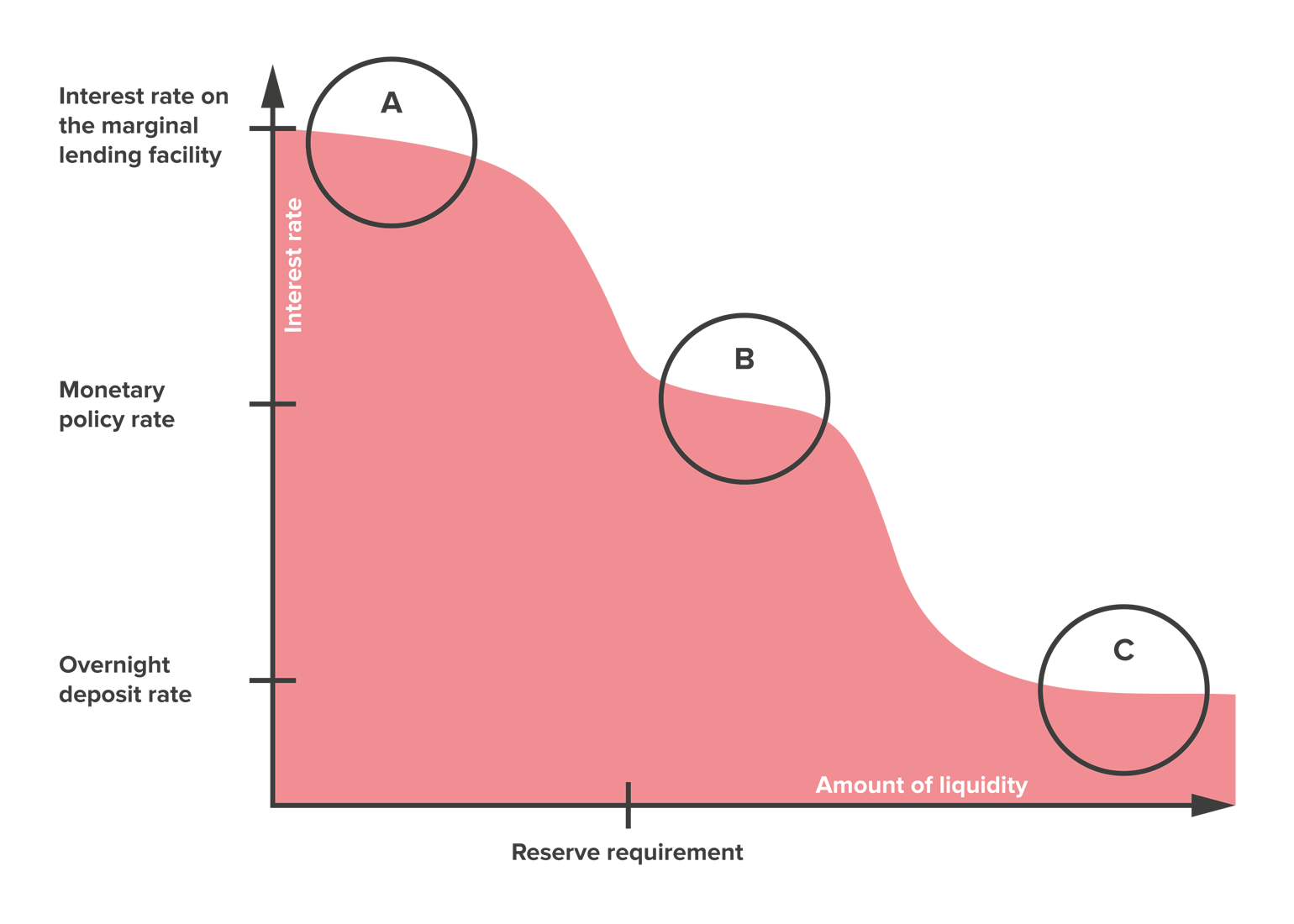 When the liquidity needs of the banking system are just barely met, the unsecured overnight rate (Eonia) comes very close to the minimum bid rate of the main refinancing operations, or the monetary policy rate.

If it is highly likely that the amount of central bank money will be so low that banks will have to resort to the marginal lending facility, the interbank money market rate will rise very close to the interest rate on the marginal lending facility (area A in the figure). Correspondingly, when there is a very high liquidity surplus, banks will have to make overnight deposits with the central bank and the interbank rate will sink close to the overnight deposit rate (area C). The third situation where the interest rate will show minimum elasticity to changes in liquidity is when market interest rates are close to the minimum bid rate of the main refinancing operations, or policy rate (area B).

Before the financial crisis, the Eurosystem conducted monetary policy by steering short-term market rates close to the policy rate by adjusting the amount of liquidity offered in the market operations to be appropriate for the prevailing situation (area B). Since the financial crisis, the amount of liquidity in the banking system has risen to a high level due to the fixed rate full allotment (FRFA) procedure applied in the auctions, the longer-term refinancing operations and the securities purchases. As a consequence, short-term money market rates have been close to the overnight deposit rate (area C).

On the liquidity of the banking system at the ECB website

Balance sheet of the Bank of Finland