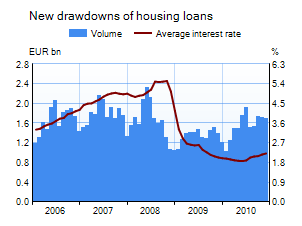 In November, household deposits decreased by approximately EUR 0.7 billion as a result of a reduction in the amount of deposits on transaction accounts. Household deposits totalled EUR 76,0 billion at the end of November, and the corresponding average interest rate rose to 0.86%. In November, households made new fixed-term deposits in the amount of EUR 2.6 billion. The average interest rate on new fixed-term deposits rose by nearly one-tenth of a percentage point to 1.78%, from 1.69% in October.

The next news release will be published at 1 pm on Monday 31 January 2011.