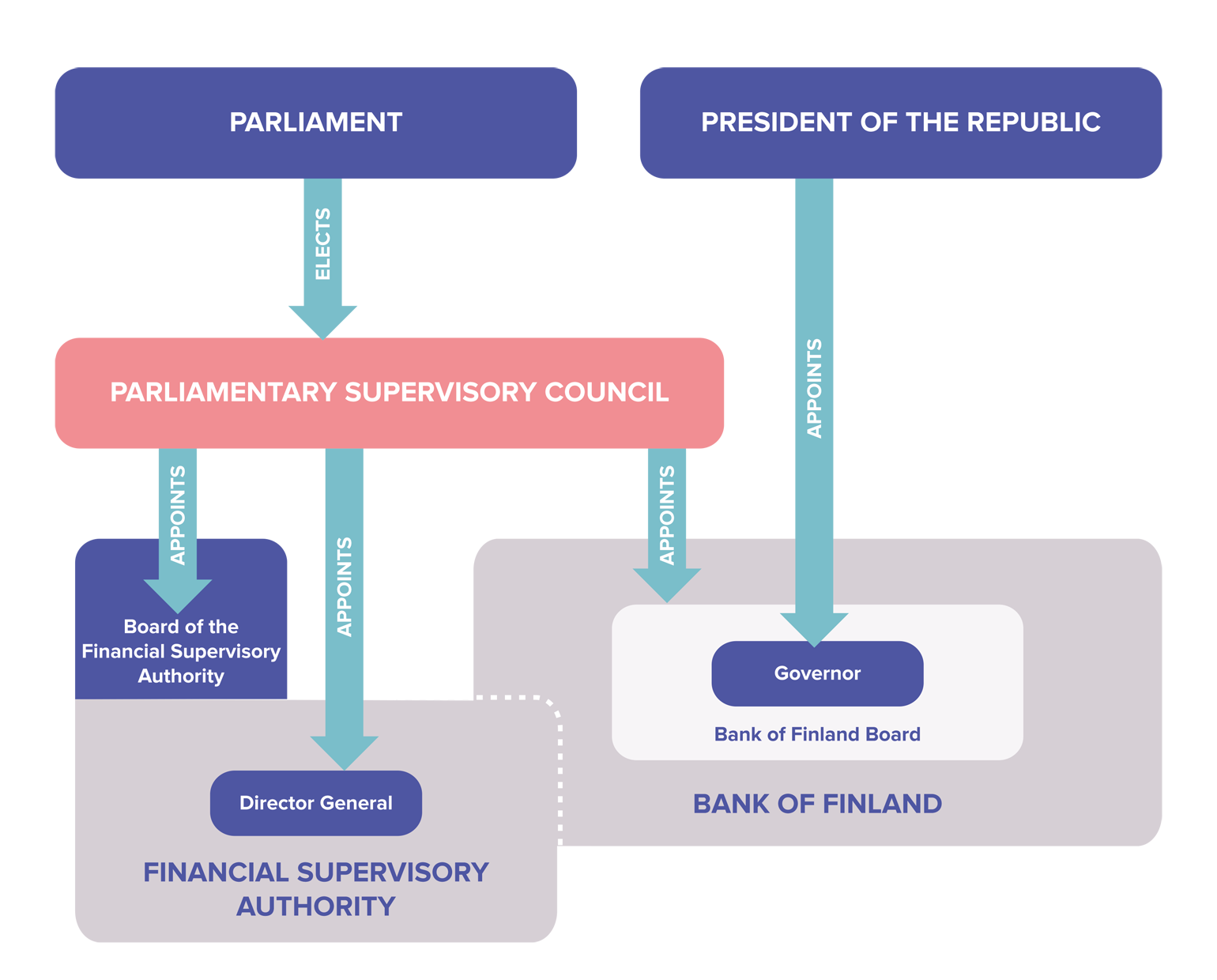 The Bank of Finland’s operations are supervised by the Parliamentary Supervisory Council, which consists of nine members appointed by Parliament. Responsibility for the statutory tasks imposed on the Bank belongs to the Board, which comprises the Governor – acting as chairman – and a maximum of five other members.

The Governor is appointed by the President of the Republic upon the recommendation of the Parliamentary Supervisory Council. The other members of the Board are appointed directly by the Parliamentary Supervisory Council. The Governor is appointed for a seven-year term, while the other members of the Board have five-year terms. The Governor may be selected for two terms and the other Board members for a maximum of three terms.

In undertaking the tasks of the ESCB, the Bank operates within the framework and guidelines of the European Central Bank. In other respects the Bank of Finland operates independently and, where necessary, in cooperation with the Finnish Government and other relevant authorities. National central banks also have tasks outside the scope of the ESCB.

The Financial Supervisory Authority (FIN-FSA), which supervises individual banks and the financial markets, operates in connection with the Bank of Finland. The FIN-FSA’s objective is to promote financial market stability and confidence in the operations of supervised entities and the markets.

Act on the Bank of Finland

The provisions of the Act on the Bank of Finland state that the Bank of Finland is Finland's central bank and acts as part of the ESCB. In performing the tasks of the ESCB, the Bank acts in accordance with the guidelines and instructions of the European Central Bank. It may not seek or take instructions from any bodies other than the European Central Bank in performing ESCB tasks. The primary objective of the Bank is the maintenance of price stability. It also supports the achievement of other economic policy objectives, without prejudice to the primary objective. The Bank also contributes to the execution of monetary policy as defined by the Governing Council of the European Central Bank. Other tasks include maintenance of the currency supply and issue of banknotes, holding and management of foreign exchange reserves, and ensuring the reliability and efficiency of the payment system and the overall financial system. Furthermore, the Bank is responsible for the compilation and publication of statistics required for carrying out its tasks.

Distribution of the Bank of Finland’s profit