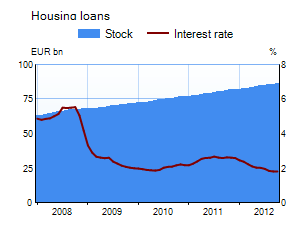 The stock of euro-denominated housing loans extended by MFIs to households grew in October by EUR 0.4 billion and at the end of the month amounted to EUR 80.9 billion. The annual rate of growth in the stock of housing loans fell to 6.4 per cent. The average interest rate on housing loans rose by 0.02 percentage point over September's rate and by the end of October was 2.51%.

New loan agreements with non-financial corporations amounted to EUR 7.5 bn in October, which is EUR 0.5 bn less than in September and EUR 0.3 bn less than in October 2010. The average interest rate of new agreements increased by 0.09 percentage points to 2.69% in October. The stock of euro-denominated loans to non-financial corporations continued to grow; the monthly growth for October was EUR 0.5 bn. The annual growth rate accelerated to 6.2%. At end-October the stock was EUR 60.2 bn. The average interest rate on the stock remained unchanged at 2.87%.

The stock of household deposits diminished by EUR 0.2 bn in October. At the end of the month, the stock amounted to EUR 80.9 bn and the average interest rate to 1.05%, which included an increase of 0.02 percentage point on September. The stock of deposits with agreed maturity increased over the month by EUR 0.3 bn, while the stock of overnight deposits contracted by EUR 0.5 bn.