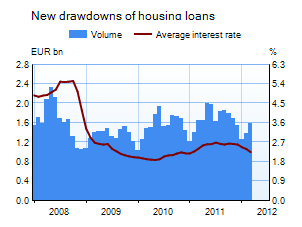 Households' new drawdowns of housing loans amounted to EUR 1.6 bn in March 2012, which is almost as much as a year earlier. The average interest rate on new housing-loan drawdowns fell by 0.14 percentage point from February, to 2.23%. At end-March the stock of euro-denominated housing loans amounted to EUR 82.5 bn and carried an average interest rate of 2.34%. The annual growth rate of the housing loan stock increased from February, to 6.5% in March.

New drawdowns of loans to non-financial corporations (excluding overdrafts and credit card credit) amounted to EUR 2.0 bn in March, which is about EUR 300 m more than a year earlier. The average interest rate on new corporate loans fell to 2.19%, from 2.30% in February. At end-March the stock of euro-denominated loans to non-financial corporations amounted to EUR 61.9 bn, of which loans to housing corporations totalled EUR 14.4 bn. The annual growth rate of the corporate loan stock accelerated to 7.9%, from 7.4% in February.