Investment funds reported a profit of EUR 8.7 billion for 2009 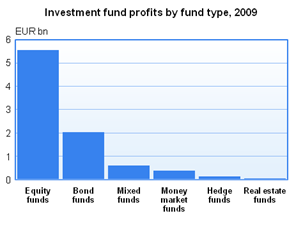 Investment funds registered in Finland reported total profits of EUR 8.7 billion for the financial year 2009. This was mainly composed of net income from securities, in the amount of EUR 7.8 billion. The high level of net income from securities was due largely to the strong global stock market rally that began in March 2009. In 2008, investment funds posted a loss of EUR 12.7 billion, which was correspondingly due to a sharp decline in share prices.

Every fund category reported profits for the financial year under review1. Equity funds’ share of the aggregate profit of investment funds was by far the largest, totalling EUR 5.6 billion. Equity funds also led the fund categories in terms of fund assets at the end of 2009. The profits of bond funds amounted to EUR 2.0 billion; for mixed funds the total was EUR 0.6 billion. Investment funds earned aggregate interest income of EUR 809 million, which is 43% less than in 2008. Bond funds and money market funds accounted respectively for EUR 488 million and EUR 237 million of the interest income. Domestic investment funds received EUR 397 million worth of dividend income from shares and income from fund shares. Most of this income went to equity funds, whose portfolios are almost entirely made up of shares and fund shares.

Expenses recorded by investment funds amounted to EUR 555 million in 2009. Of this, EUR 417 million comprised fees paid to fund management companies and custodians. Fees paid in 2008 were slightly higher, at EUR 481 million. 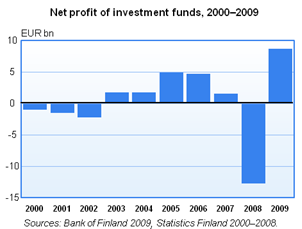