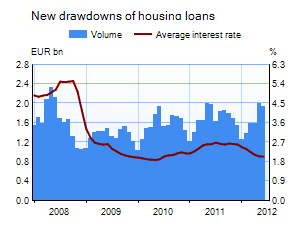 Finnish households concluded 1,557 new long-term savings agreements in the second quarter of 2012. In the first quarter, there had been 2,475 new agreements. The total number of the agreements at end-June was 22,457. New deposits placed in long-term savings accounts amounted to a total of EUR 2.2 million in March–June. The end-June value of the savings was EUR 32.9 million, of which the bulk was invested in fund shares (61%).

Households' new drawdowns of housing loans amounted to EUR 1.9 billion in June 2012, which is almost as much as a year earlier (EUR 2.0 billion). The average interest rate on new housing-loan drawdowns was 2.02% in June, ie nearly the same as in May. At end-June the stock of euro-denominated housing loans was EUR 84 billion and the average interest rate on the stock was 2.11%. The annual growth rate of the housing loan stock increased slightly in June, to stay at 6.6%. At end-June household credit comprised EUR 13 billion in consumer credit and EUR 15 billion in other loans.

New drawdowns of loans to non-financial corporations amounted to EUR 3.0 billion in June, which is EUR 0.2 billion more than a year earlier. From May to June, the average interest rate on new corporate-loan drawdowns increased slightly, by 0.02 percentage point, and was 2.20%. At end-June the stock of euro-denominated loans to non-financial corporations was EUR 63 billion, of which loans to housing corporations accounted for EUR 15 billion. The annual growth rate of the corporate loan stock rose to 8.0%, from 7.6% in May.

At end-June the stock of household deposits amounted to EUR 83.5 billion and the average interest rate on the stock was 0.96%. Overnight deposits accounted for EUR 45 billion and deposits with agreed maturity for EUR 24 billion of the total deposit stock. In June households concluded EUR 2.1 billion of new agreements on deposits with agreed maturity. The average interest rate on these declined to 1.66%, from 1.73% in May.

Related statistical data and graphs are also available on the Bank of Finland website: http://www.suomenpankki.fi/en/tilastot/Pages/default.aspx.