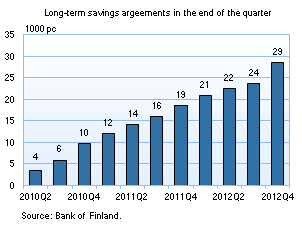 Finnish households concluded just over 5,000 new long-term savings agreements in the fourth quarter of 2012. The Government's proposal in spring to raise the age limit for withdrawal of savings as from the beginning of 2013 was instrumental to the increase in new agreements in 2012. The higher age limit affects all long-term savings accounts opened in 2013, as savings from these accounts may not be withdrawn until age 68. Old accounts are governed by the old act, so that withdrawal of such savings is possible at age 63.

A total of EUR 6.5 million was invested in long-term savings accounts in the fourth quarter of the year. Willingness to save typically peaks in the last quarter, as savers suddenly notice that they still need to save in order to have enough savings to get the annual maximum tax deduction. At the end of the year, the number of the agreements was 28,500, EUR 21 million worth of new savings having flowed into long-term savings accounts during the year. The value of the savings at end-December totalled EUR 47 million. The bulk of the savings is invested in mutual fund shares. At the end of 2012, mutual fund shares accounted for two-thirds of investments in long-term savings accounts.

New drawdowns of loans to non-financial corporations (excl. overdrafts and credit card credit) amounted to EUR 3.3 billion in December, which is EUR 0.7 billion more than a year earlier. The average interest rate on new corporate-loan drawdowns rose by 0.05 percentage point from November, to 2.02%. At end-December the stock of euro-denominated loans to non-financial corporations was EUR 63 billion, of which loans to housing corporations accounted for EUR 16 billion. The annual growth rate of the corporate loan stock fell by 0.2 percentage point, to 5.2% in December.

At end-December the stock of household deposits amounted to EUR 82 billion. The average interest rate on the stock was 0.72%. Overnight deposits accounted for EUR 48 billion and deposits with agreed maturity for EUR 20 billion of the total deposit stock. In December households concluded EUR 1.2 billion of new agreements on deposits with agreed maturity. The average interest rate on these declined to 1.10%, from 1.16% in November.