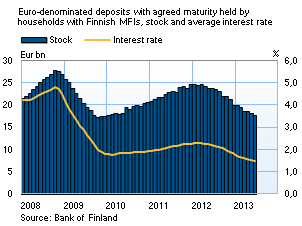 New drawdowns of housing loans in June 2013 amounted to EUR 1.4 billion, or EUR 0.5 billion less than a year earlier. The average interest rate on new drawdowns in June was 2.04%, slightly higher than in May. Outstanding euro-denominated housing loans to households amounted to EUR 87.4 billion at the end of June and the average interest rate was 1.46%. The annual growth rate of the housing loan stock continued to decline in June, to 3.9%. At the end of June, household credit comprised EUR 12.9 billion in consumer credit and EUR 15.2 billion in other loans.

New drawdowns of loans to non-financial corporations (excl. overdrafts and credit card credit) amounted to EUR 3.0 billion in June, as in June 2012. The average interest rate on new corporate-loan drawdowns fell by 0.13 of a percentage point from May, to 1.90%. The stock of euro-denominated loans to non-financial corporations at the end of June was EUR 64.9 billion, of which loans to housing corporations accounted for EUR 17.0 billion. The annual growth rate of the euro-denominated corporate loan stock accelerated by 0.3 of a percentage point from May, to 4.3% in June.