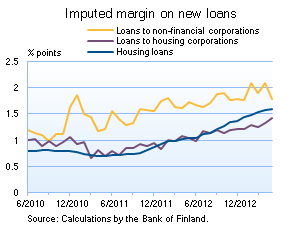 Households' new drawdowns of housing loans in May 2013 amounted to EUR 1.5 bn, which is EUR 0.5 bn less than in May 2012. The average interest rate on new drawdowns was 2.02% in May, which was down slightly from April rates. Outstanding MFI euro-denominated housing loans to households amounted to 87 billion at the end of May and the average interest rate was 1.48%, In May, the growth in the stock of housing loans continued to slow down and was 44%. By the end of May, consumer loans as part of represented EUR 13 bn and other loans came to EUR 15 bn.

New corporate loans (excl. overdraft and credit card credit) rose in May by EUR 2.1 bn, which is EUR 0.1 bn more than in May 2012. The average interest rate on new corporate loans fell by 0.10 percentage point to 2.03%. By the end of May 2013, the stock of euro-denominated loans granted to corporations was EUR 65 bn. of which EUR 17 bn was in loans granted to housing corporations. The annual growth rate of euro-denominated corporate loans accelerated in April slightly and stood at 0.1 percentage point and in May at 4.0%.