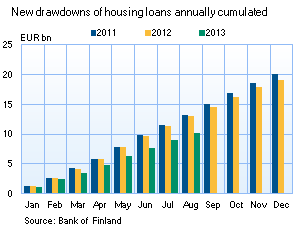 In August 2013, households’ new drawdowns of housing loans were much lower than in the previous years. New housing loan drawdowns amounted to EUR 1.3 bn, compared to over EUR 1.7 bn in 2012 and to as much as EUR 1.8 bn in August 2011. The cumulative sum of new drawdowns for 2013 (January-August) was almost EUR 3 bn lower than the cumulative sum for the corresponding period in 2012. The increase in loan margins has evidently come to a halt: in August the imputed interest margin was 1.61 percentage points, ie just 0.01 percentage point higher than in the previous month. Furthermore, according to the most recent data of the Federation of Finnish Financial Services, bank managers assess that loan demand by households will continue to be exceptionally sluggish and that it will even weaken further (Bank barometer III/2013).

Households’ new drawdowns of housing loans amounted to EUR 1.3 bn in August 2013, which is EUR 0.4 bn less than in August 2012. The average interest rate on new housing-loan drawdowns was 2.08%, slightly up on July. At end-August the stock of euro-denominated housing loans was EUR 87.8 bn and the average interest rate on the stock was 1.45%. The annual growth rate of the housing loan stock moderated further, to 3.3%. At end-August household credit comprised EUR 13 bn in consumer credit and EUR 15.2 bn in other loans.

New drawdowns of loans to non-financial corporations (excl. overdrafts and credit card credit) amounted to EUR 1.7 bn in August, which is about EUR 0.2 bn more than a year earlier. The average interest rate on new corporate-loan drawdowns declined by 0.16 percentage point, to 2.30%. At end-August the stock of euro-denominated loans to non-financial corporations was EUR 65.4 bn, of which loans to housing corporations accounted for EUR 17.3 bn. The annual growth rate of the euro-denominated corporate loan stock picked up to 5.2% in August.

At end-August the stock of household deposits totalled EUR 82.1 bn. The average interest rate on the stock was 0.49%. Overnight deposits accounted for EUR 50.6 bn and deposits with agreed maturity for EUR 17.0 bn of the total deposit stock. In August households concluded EUR 0.9 bn of new agreements on deposits with agreed maturity. The average interest rate on these was 1.12%.