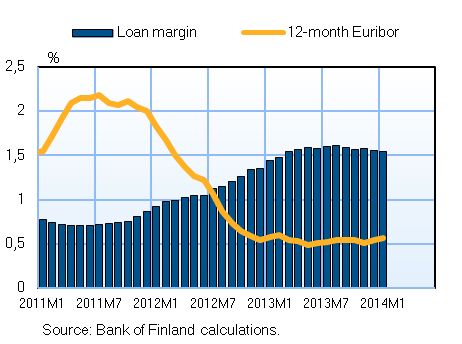 In Finland, the stock euro-denominated housing loans contracted by just under EUR 30 m in January, continuing the negative trend observed in December. As throughout 2013, the average interest rate on new housing-loan drawdowns remained around 2% in January. The imputed interest margin was 1.54%, compared to 1.44% at the beginning of 2013. The imputed interest margin is the difference between the annualised agreed rate and the reference rate. In Finland, 95% of new housing loan drawdowns are tied to Euribor rates. Fixed-rate agreements have become markedly less popular in the past two years: at the beginning of 2012 they accounted for almost 10% of new housing loans, compared to 3% in January 2014.

In January 2014, households’ new drawdowns of housing loans amounted to eur 1 bn, which was EUR 0.1 bn less than a year earlier in January. The average interest rate on new housing-loan drawdowns was 2.03%, the same as in December 2013. At the end of January, the stock of euro-denominated housing loans was EUR 88.3 bn and the average interest rate on the stock was 1.49%. The annual growth rate of the housing loan stock moderated further, to 2.2%. At end-January, household credit comprised EUR 13 bn in consumer credit and EUR 15 bn in other loans.

At the end of January, the stock of household deposits totalled EUR 81 bn. The average interest rate on the stock was 0.45%. Overnight deposits accounted for EUR 52.1 bn and deposits with agreed maturity for EUR 15.2 bn of the total deposit stock. In January, households concluded EUR 1.2 bn of new agree-ments on deposits with agreed maturity. The average interest rate on these was 1.15%.

The next news release will be published at 1 pm on 31 March 2014.
The releted statistical data and graphs are also availabel on the Bank of Finland website: http://www.suomenpankki.fi/link/2331b6266da3492f832ec75e0f654bd9.aspx?epslanguage=en.