In December 2019, the annual growth rate of the stock of loans to housing corporations was 8.3%, while in January 2019 it had still been almost 12%. The loan stock even contracted slightly from the previous month, to EUR 34.8 bn at the end of December. Before this, it had grown uninterruptedly month-on-month for six years. According to Statistics Finland, housing company loans borne by households amounted to EUR 17.3 bn, which is about half of the stock of housing corporation loans. Housing company loans accounted for 11% of households’ total debts.

In 2019, drawdowns of new housing corporation loans amounted to EUR 6 bn, which is 10% less than in 2018. The number of genuine new agreements was also lower in 2019 than in 2018, even though in the last quarter of 2019 it was higher than in the corresponding period a year earlier.

Impairments and credit losses on housing corporation loans have remained low, and the share of non-performing loans in the loan stock is small. 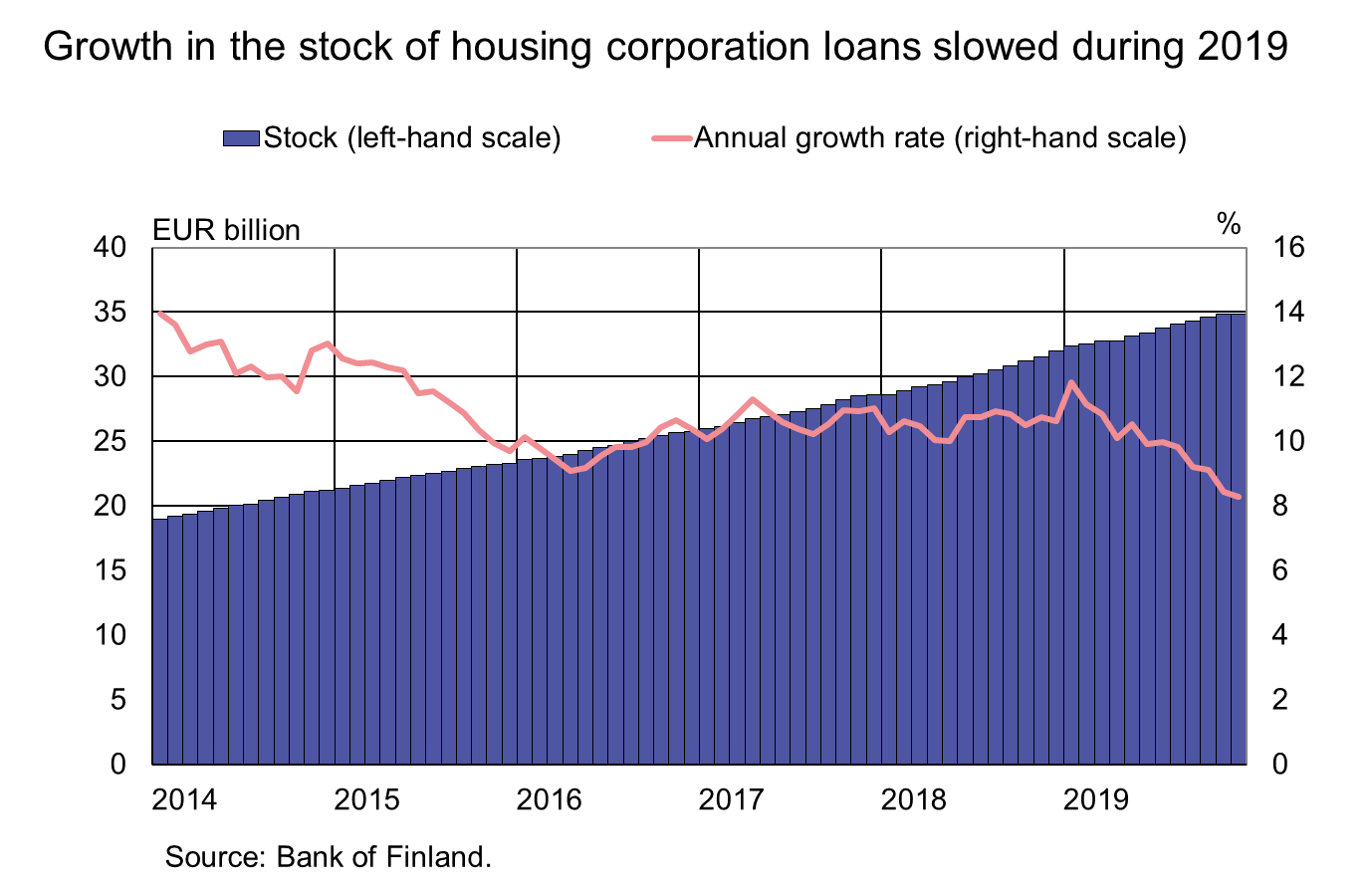 Households’ drawdowns of new housing loans in December 2019 amounted to EUR 1.5 bn, up by EUR 200 million on the corresponding period a year earlier. At the end of December, the stock of euro-denominated housing loans totalled EUR 100.4 bn and the annual growth rate of the stock was 2.7%. Household credit at end-December comprised EUR 16.5 bn in consumer credit and EUR 17.6 bn in other loans. Drawdowns of new loans by non-financial corporations (excl. overdrafts and credit card credit) amounted to EUR 2.5 bn in December. The average interest rate on new corporate-loan drawdowns declined from November, to 1.91%. At the end of December, the stock of euro-denominated loans to non-financial corporations1 totalled EUR 91.0 bn.

At the end of December 2019, the stock of deposits of Finnish households amounted to EUR 94.8 bn and the average interest rate on the deposits was 0.11%. Overnight deposits accounted for EUR 82.0 bn and deposits with an agreed maturity for EUR 4.7 bn of the deposit stock. In December, households concluded EUR 0.3 bn of new agreements on deposits with an agreed maturity, at an average interest rate of 0.15%.