Drawdowns of student loans in August 2020[1] totalled EUR 176 million, an increase of 6% on August a year earlier. The average interest rate on student loan drawdowns was record low in August, at 0.28%. Thanks to government guarantees, student loans pose a low risk for banks, which is reflected in the low margins on these loans.

The impact of the coronavirus crisis was particularly evident in drawdowns of student loans in June 2020: the total amount taken out was EUR 59 million, almost twice the amount compared with June a year earlier. One of the factors explaining this increase could be that there have been fewer summer jobs available during the coronavirus crisis. In addition to the greater popularity on student financial aid for the summer, many students may also have taken out their student loan for the academic year 2019–2020 as late as June this year. This was also the first time when most of the summer aid recipients could take out their student loan instalment for the autumn term already in June, which contributed to reducing the amounts drawn down in August more than in previous years. In summer 2020, student loan drawdowns were 20% higher than in the corresponding period a year earlier.

Fuelled by the high amount of drawdowns in the summer, the stock of student loans grew to EUR 4.5 bn in August 2020. The annual growth rate of the student loan stock was still brisk in August (16.1%), even though it has moderated over the past two years. Since the student financial aid reform of 2017, the student loan stock has grown by EUR 2 bn. This growth stems not only from larger loans granted as a result of the reform, but also from a higher number of borrowers, which in turn partly reflects the low level of interest rates.

Despite the brisk growth in the student loan stock, the stock of claims on government guarantees[2] contracted slightly in 2019. The repayment of student loans usually begins after the completion of studies, and the interest is capitalised as long as a student receives financial aid. Hence, any problems with loan repayment may be reflected in the stock of claims on government guarantees with a delay. 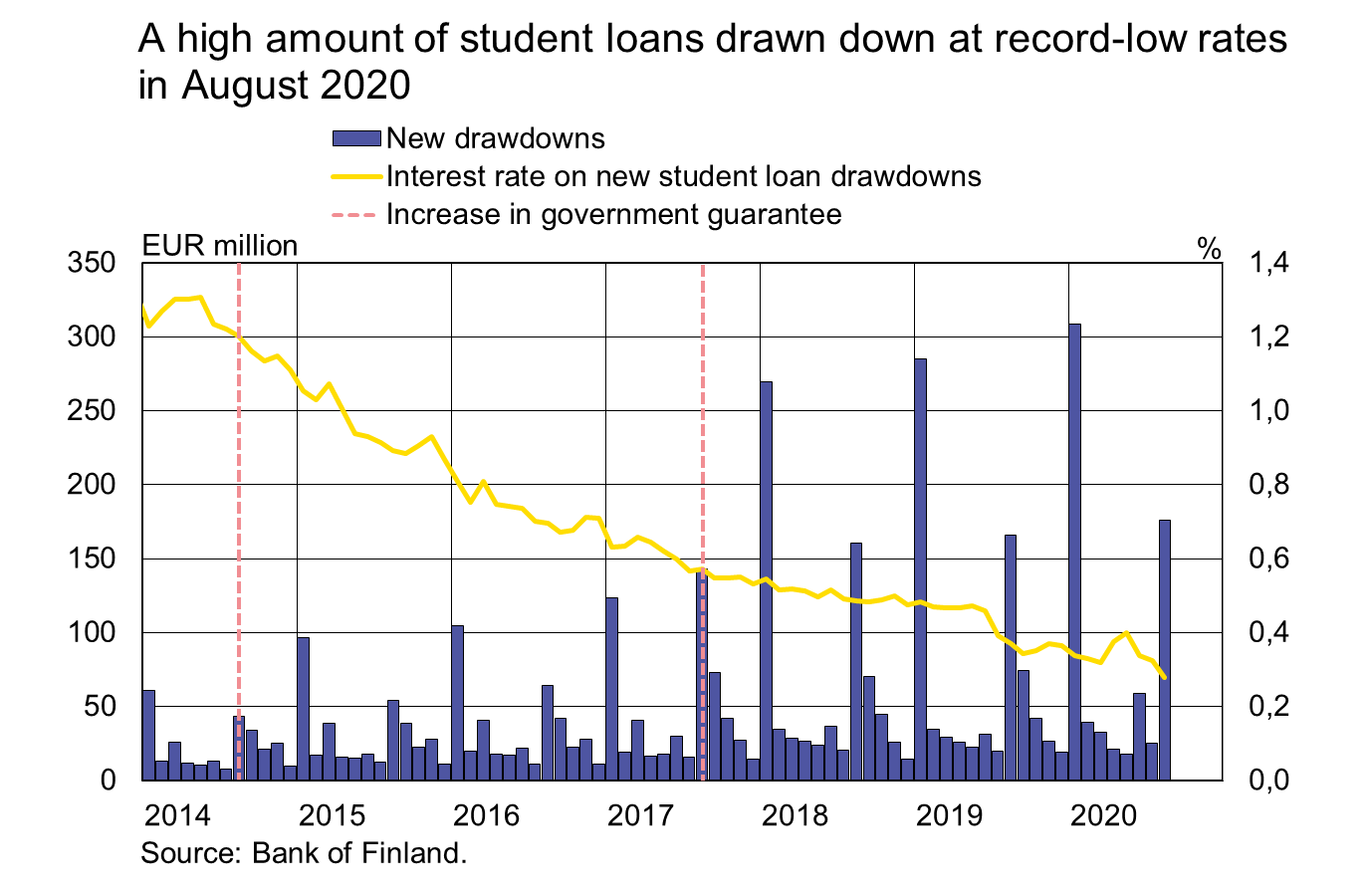 Households’ drawdowns of new housing loans in August 2020 amounted to EUR 1.7 bn, the same as in August a year earlier. At the end of August 2020, the stock of euro-denominated housing loans totalled EUR 102.1 bn and the annual growth rate of the stock was 2.7%. Household credit at end-August comprised EUR 16.8 bn in consumer credit and EUR 18.2 bn in other loans.

Drawdowns of new loans by non-financial corporations (excl. overdrafts and credit card credit) in August amounted to EUR 1.5 bn. The average interest rate on new corporate loan drawdowns declined from July, to 1.77%. The stock of euro-denominated corporate loans at end-August totalled EUR 97.4 bn, of which loans to housing corporations accounted for EUR 36.7 bn.

[1] The instalment for the autumn term could be taken out starting 1 August 2020.