After a brisk acceleration in the early part of 2020, growth in the stock of corporate loans slowed during the summer. With the exception of housing corporations, Finnish non-financial corporations drew down exceptionally few loans[1] (to a value of EUR 973 million) in September 2020. For the July–September quarter there were less new corporate loan drawdowns than in any equivalent quarter in the 2010s.

The pace of corporate loan drawdowns has changed a great deal since the first half of the year, during which non-financial corporations drew down new loans to a total value of EUR 10.8 billion. The last time the first half of the year exceeded this total was in 2014. In May, the stock of corporate loans[2] exceeded EUR 60 billion, totalling EUR 60.2 billion at the end of September.

Uncertainty and precautionary behaviour have been reflected in a rapid growth in deposits by non-financial corporations. There has been a particularly marked flow of cash into overnight deposits. The stock of overnight deposits (EUR 41.6 billion) has grown during the current year by EUR 6.0 billion, and the pace of annual growth has increased rapidly, to stand at 26.5% in September. The average interest rate paid on overnight deposits dipped below zero in March and stood at -0.04% in September. 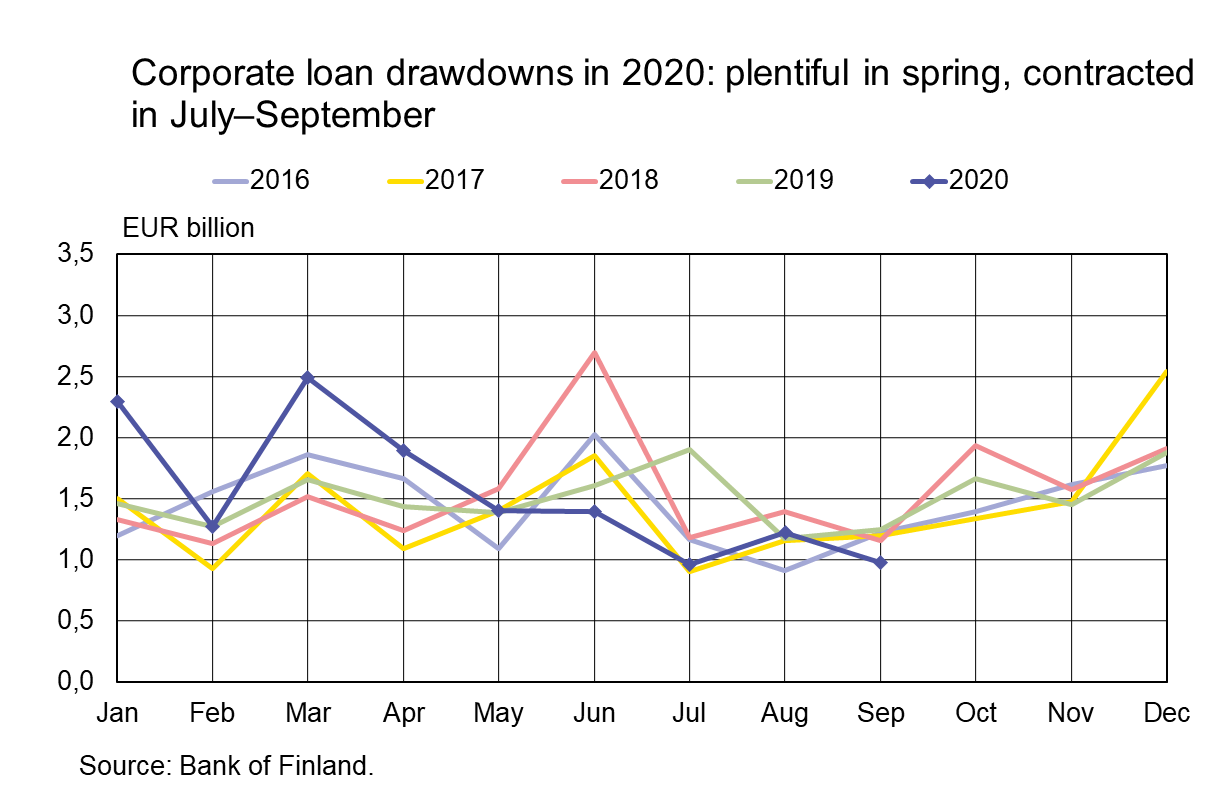 Household drawdowns of new housing loans in September totalled EUR 1.9 billion, EUR 170 million more than in the same period a year earlier. At the end of September, the euro-denominated stock of housing loans stood at EUR 102.5 billion, representing annual growth of 2.9%. Out of all household loans at the end of September, consumer credit totalled EUR 16.7 billion, while other loans amounted to EUR 18.3 billion.

The next monetary and banking statistics release will be published on 30 November 2020 at 13:00.

The statistical figures and graphics this release is based on can be viewed on the Bank of Finland website at https://www.suomenpankki.fi/en/Statistics/mfi-balance-sheet/.