New agreements made on deposits with agreed maturity in September 2022 totalled EUR 240 million, an increase of EUR 170 million on August 2022 and on September last year. Most of the new agreements (71%) were with a maturity of up to 1 year.

As interest rates paid on deposits with agreed maturity have fallen, the popularity of the deposits has also decreased almost uninterruptedly over the past decade. At the end of September 2022, agreed maturity deposits accounted for only 2%, or EUR 2.2 billion, of assets held by households in deposit accounts.

Now that interest rates have risen, there is a slight increase already discernible in the popularity of deposits with agreed maturity. In September 2022, the stock of these deposits grew by over EUR 100 million month-on-month. Year-on-year, however, the deposit stock contracted by 9.5%, but the pace of contraction has moderated notably.

The annual growth rate of the aggregate stock of household deposits (EUR 113.6 billion) has slowed significantly. In September 2022, the growth rate was 3.7%, after having been over 7% a year earlier. Of assets held by households in deposit accounts, 92%, or EUR 104.5 billion, was held in transaction accounts[1]. The average interest rate on transaction accounts was 0.03% in September. 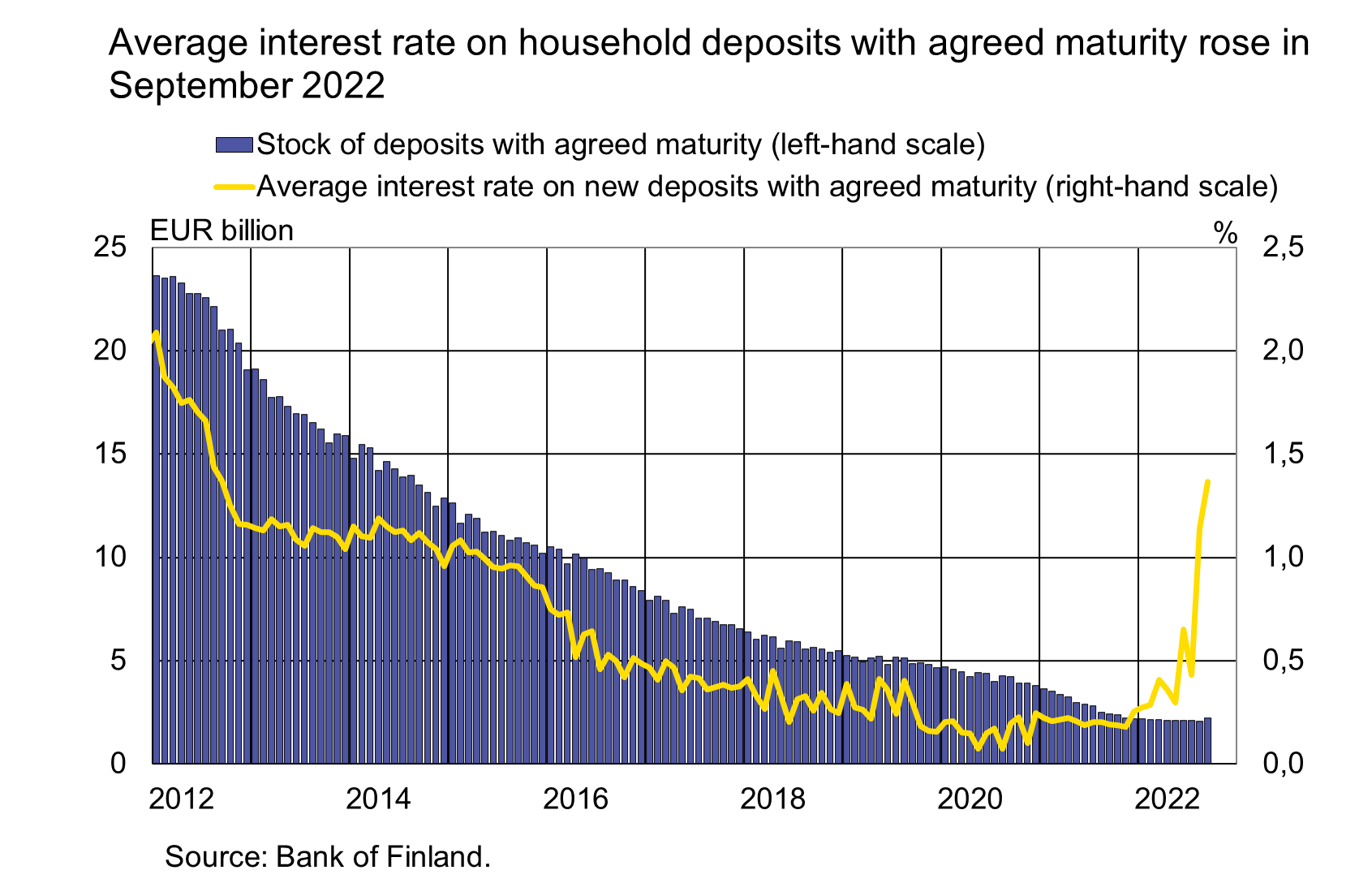 Finnish households drew down EUR 1.6 billion of new housing loans in September 2022, a decline of EUR 410 million year-on-year. Of the total, EUR 127 million was investment property loans. The average interest rate on new housing loans rose from August, to 2.75%. At the end of September 2022, the stock of housing loans totalled EUR 107.7 billion, and the annual growth rate of the loan stock was 1.6%. Investment property loans accounted for EUR 8.8 billion of the housing loan stock. Of the stock of all loans to Finnish households at the end of September, consumer credit totalled EUR 17.0 billion and other loans, EUR 18.3 billion.

The next news release on money and banking statistics will be published at 10:00 on 30 November 2022.

Related statistical data and graphs are also available on the Bank of Finland website: https://www.suomenpankki.fi/en/Statistics/mfi-balance-sheet/

[1] Transaction accounts are overnight deposits repayable on demand. In addition to daily transaction accounts, they include other household accounts which do not have withdrawal restrictions but only enable cash withdrawals or which can only be used via another account.