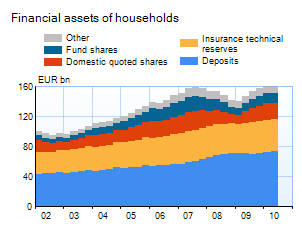 Corporate loan-based liabilities increased by EUR 2.1 billion in the second quarter of 2010. The stock of loans at the end of June, excluding domestic intercompany loans, was EUR 93.5 billion. All in all, in April−June 2010, corporate loan-based financing (loans and debt certificates) rose by EUR 2.2 billion.

The value of listed shares issued by domestic companies fell by EUR 20.6 million in April−June 2010, totalling EUR 114.3 billion at the end of June.
The above information is from the quarterly financial-account statistics compiled by the Bank of Finland. These provide an overview of the stocks of financial assets and liabilities of the different sectors of the national economy and of the related transaction flows.

1) Data excludes unquoted shares and other equity, and other accounts receivable. Shares in housing corporations are also excluded from financial assets.

At the end of 2010, compilation of quarterly Finnish financial accounts statistics will be transferred from the Bank of Finland to Statistics Finland. Statistics Finland will begin to publish this data with effect from January 2011, when data for the third quarter of 2010 will be available