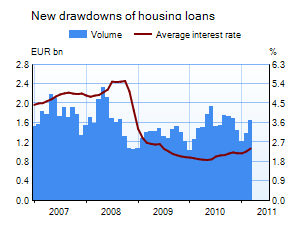 Households’ new drawdowns of housing loans amounted to EUR 1.6 bn in March 2011, which was EUR 0.3 bn more than in February and EUR 0.2 bn more than in March 2010. The average interest rate on new housing-loan drawdowns rose by 0.14 percentage point to 2.40%. The stock of euro-denominated MFI housing loans to households grew by EUR 0.4 bn on February, to EUR 77.5 bn at end-March. The annual growth rate of the stock of housing loans decreased to 6.8% in March, from 6.9% in February. The average interest rate on the housing loan stock increased by 0.05 percentage point on February, to 2.14% in March.