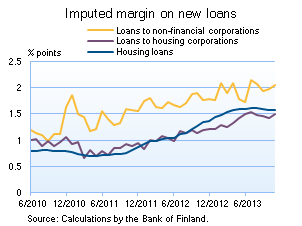 Interest rates on new housing loan agreements remained around 2% throughout the year 2013, and the imputed interest margin on housing loans declined slightly from its peak of 1.61% in August to 1.57% in November. Margins on new corporate loan agreements have, however, continued to widen. The imputed interest margin on corporate loans (excl. housing corporation loans) had risen by 0.3 of a percentage point since the summer to 2.04% in November. Margins on housing corporation loans remained around 1.5% throughout the autumn of 2013.

In November 2013, households’ new drawdowns of housing loans amounted to EUR 1.2 bn, which is EUR 0.4 bn less than a year earlier in November. The average interest rate on new housing-loan drawdowns in November was 2.0%, ie slightly down on October 2013. Outstanding euro-denominated housing loans to households amounted to EUR 88.3 bn at the end of November and the average interest rate was 1.47%. The annual growth rate of the housing loan stock moderated further, to 2.6%. At the end of November, household credit comprised EUR 13 bn in consumer credit and EUR 15 bn in other loans.

New drawdowns of loans to non-financial corporations (excl. overdrafts and credit card credit) amounted to EUR 2.5 bn in November, which is about EUR 0.5 bn less than in November 2012. The average interest rate on new corporate-loan drawdowns increased slightly from October, to 2.15%. The stock of euro-denominated loans to non-financial corporations at the end of November was EUR 66.4 bn, of which loans to housing corporations accounted for EUR 17.8 bn. The annual growth rate of the euro-denominated corporate loan stock picked up to 6.2% in November.

At the end of November, the stock of household deposits totalled EUR 81 bn. The average interest rate on the stock was 0.48%. Overnight deposits accounted for EUR 50.7 bn and deposits with agreed maturity for EUR 16.5 bn of the total deposit stock. In November, households concluded EUR 1.7 bn of new agreements on deposits with agreed maturity. The average interest rate on these was 1.11%.