In January 2021[1] new student loan drawdowns amounted to EUR 327 million, which was 6% more than in the same period a year earlier and more than ever before in a single month. The average interest on the student loans drawn down in January was at a record low (0.21%). Euribor-linked loans accounted for 93% of all the new drawdowns, with an average interest of 0.16%.

In addition to the increase in the size of loan tranches as a result of the reform of student financial aid, the stock of student loans has also been augmented by an increase in the number of borrowers. The total number of people with outstanding student loan debt has grown rapidly in recent years. According to the statistics of the Social Insurance Institution, in 2019–2020 there were 462,000 people with student debt, when three years earlier there were 84,000 less. The current low interest rates have also supported the popularity of student loans. 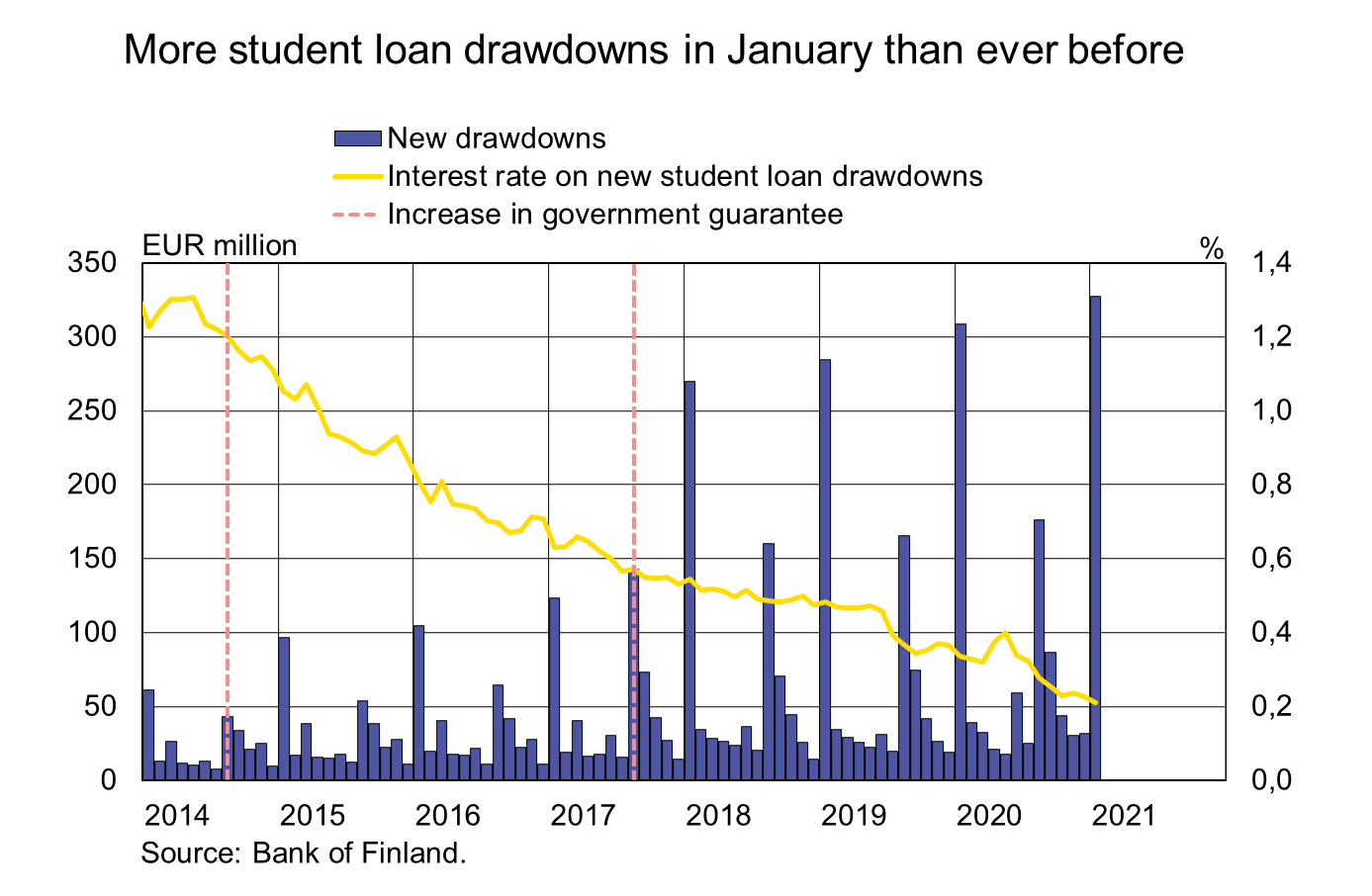 In January, households drew down new housing loans to a value of EUR 1.4 billion, or EUR 30 million more than the same month last year. At the end of January, the stock of euro-denominated housing loans stood at EUR 103.8, and annual growth in the housing loan stock was 3.6%. Of all household loans at the end of January, EUR 16.6 billion were consumption loans, while other loans totalled EUR 18.5 billion. New corporate loan drawdowns (excl. overdrafts and card credit) in January totalled EUR 1.1 billion. The average interest on these loans was up on December 2020, and stood at 2.16%. At the end of January, the stock of euro-denominated corporate loans stood at EUR 96.6 billion, of which the share of loans to housing corporations accounted for EUR 37.4 billion.

The stock of Finnish households’ deposits at the end of January totalled EUR 104.2 billion, and the average interest rate on the deposits was 0.05%. Of the total, overnight deposits accounted for EUR 93.9 billion, while deposits with agreed maturity accounted for EUR 3.6 billion. In January, households concluded new agreements on deposits with agreed maturity to a total value of EUR 75 million, at an average interest rate of 0.22%.

Related statistical data and graphs are also available on the Bank of Finland website at: https://www.suomenpankki.fi/en/Statistics/mfi-balance-sheet/.