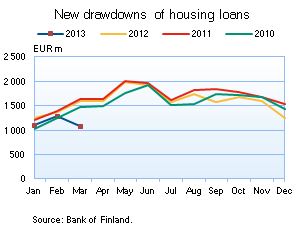 In March, new housing loans to a value of just under EUR 1.1 billion were drawn down in Finland, compared with almost EUR 1.6 billion a year earlier. The decline in new housing loan drawdowns observed already at the start of the year was further fed by the introduction of a higher rate of asset transfer tax in March. In addition, the imputed interest margin on housing loans broadened to 1.54% in March from the February figure of 1.48%.

Long-term savings also declined early in the year. In the first quarter of 2013, Finnish households agreed just slightly in excess of 300 new long-term savings contracts, while in the same period over 900 old contracts were terminated. The rather small number of new contracts was influenced by a law that came into effect at the start of the year that raised the threshold age at which funds can be withdrawn from 63 to 68 years. Despite the weak interest in this form of saving, EUR 5.9 billion was invested in long-term savings accounts in the first quarter of 2013.

The stock of household deposits at the end of March was EUR 82 billion. The average rate of interest was 0.61%. Of the total stock, overnight deposits accounted for EUR 49 billion, and fixed term deposits for EUR 18 billion. Households concluded new fixed-term deposit contracts in March in the amount of EUR 1.1 billion. The average interest on the new contracts rose slightly, from 1.12% in February to 1.14% in March.